The binders too have been busy this weekend. After an expedition to the hardware store to purchase some fine boards for the case as well as drill bits, it was off to work. (The only planks of appropriate width were fir, but this is a fair approximation for the birch used in the St. Cuthbert Gospel which we are emulating (Szirmai p. 97).)

The drilling of the boards proved moderately difficult; as we did not have a auger we resorted to holding the drill bit in a pair of vice grips. An additional issue was the fragility of the 1/16th inch drill bits we chose. Four bits were broken due to the combination of bit fragility and inconsistent “drill” angle. However, by the 32nd hole (yes, I drilled 32 holes by hand with a pair of vice grips) the technique was somewhat improved. The key appears to be in removing the bit from the hole several times throughout the drilling process, both to let it cool down, and ensure straight(ish) entry. 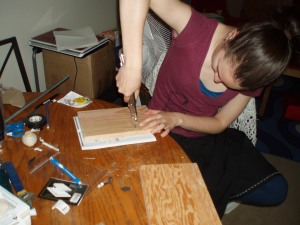 Alicia drills the case board

Blind tooling was achieved with the use of several different implements. Initially a small key with its neck wrapped in a piece of scrap leather was used; this created clean squared lines, but grew hot easily and as such was difficult to hold onto. The next attempt at a blind tooling device was a piece of twisted copper wire with twine wrapped around the shaft.  Unfortunately the wire did not hold heat very well, and as such, though it offered more comfortable control than the key, was not as effective. Finally, a phillip’s head screw driver was used to go over the knot design. The screwdriver held heat better than the copper as well as being easier to hold onto than the key.

Devin heats the leather wrapped key with a candle 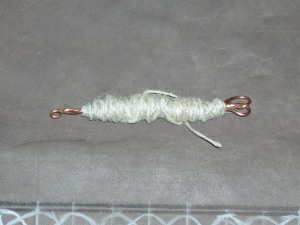 The design for the knot on the front cover is taken from on of the carpet pages in the Book of Durrow, while the frame style is mirrored after the St. Cuthbert Gospel. 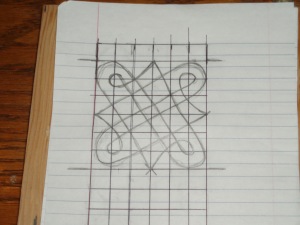 Knot pattern taken from one of the carpet pages

Frame drawn in chalk on the leather

This entry was posted on Monday, July 18th, 2011 at 1:45 am and posted in Uncategorized. You can follow any responses to this entry through the RSS 2.0 feed.
« Pictures of the Illumination Process
Egg White Binder »